In addition to the displays of dead insect collections, there area also many insects that live and thrive in this museum.

In an average year, roughly 400,000 people visit the insectarium in Montreal. 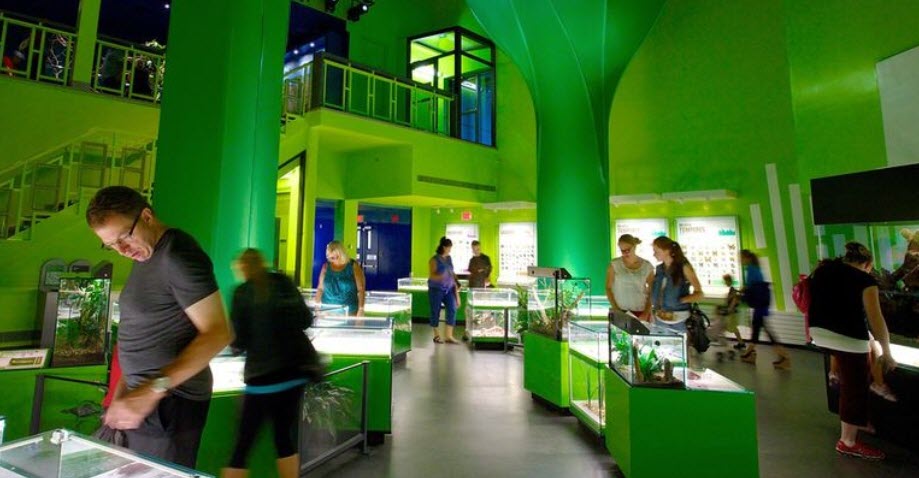 Two permanent exhibitions at the insectarium are “We are the insects” and “Atta Ants”.

We are the insects includes a wide range of insects from around the world, including many live ones that have this exhibition as their home.

Atta Ants is about leafcutter ants of the genus Atta, who live in the insectarium and carry out their natural behaviours here – including cutting up leaves and carrying the pieces back to their colony where they use the leaves to cultivate a fungus upon which they feed. Yes, that is right, the leafcutter ants are very small farmers who grow their own food.

Butterflies Go Free is a temporary event, running from late February to the end of April. During this period, butterflies from the insectarium fly free in the main exhibition greenhouse of Montreal’s Botanical Garden, which is filled with flowers that they love. Roughly 50 different species of butterfly are represented among the over 1,500 individual butterflies that are included in Butterflies Go Free. As a visitor, you can enjoy being right there with the butterflies – they can even land on you if they want to.

Within the insectarium you’ll find the BuzzGRound, a discovery space for kids and their families.

There is also an adjacent picnics area.

The Montreal Insectarium is located in Maisonneuve Park, in the borough Mercier-Hochelaga-Maisonneuve.

Two Montreal Metro stations are located near the Insectarium: Pie-IX station and Viau station. Both are on the Green Line.

The Montreal Insectarium is one of a group of facilities that together form Space for Life ( Espace pour la vie ), Canada’s largest natural science museum complex.

The Montreal Insectarium and Montreal Botanical Garden are both located in Maisonneuve Park, while The Montreal Biodome and The Rio Tinto Alcan Planetarium are situated in the adjacent Olympic Park.